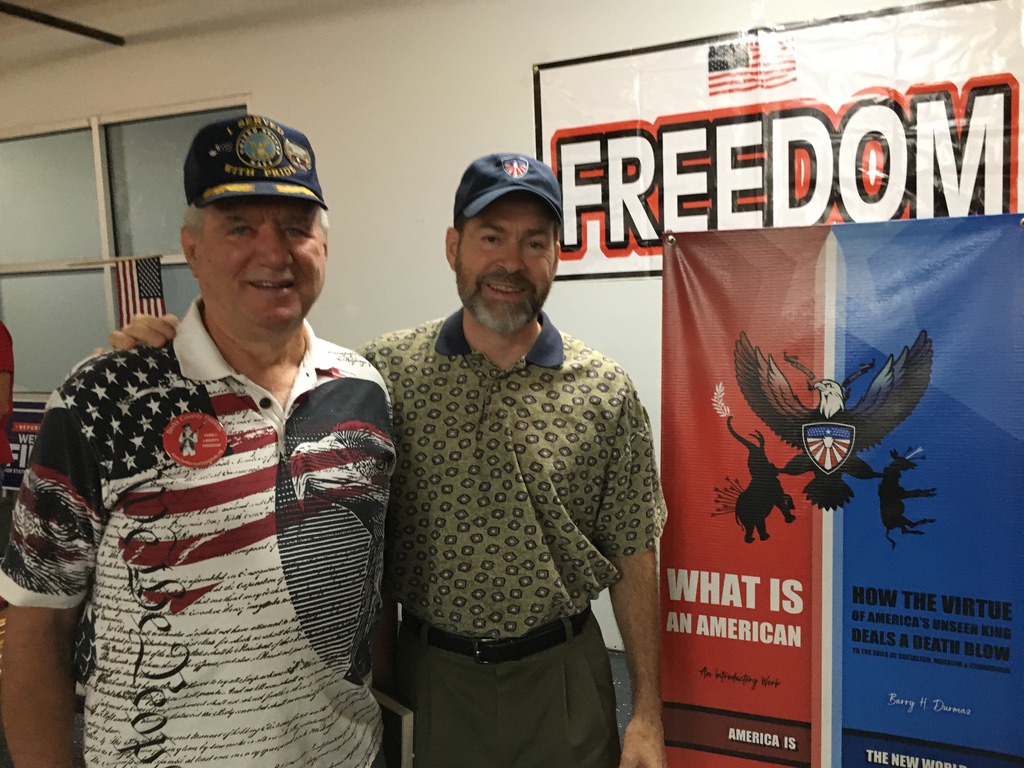 On October 6th, nationally acclaimed newspaper The Epoch Times published a story about me—about my overcoming the bureaucratic and communistic stronghold of the IRS. As of this date, this article has been commented on 1206 times and shared 3005 times. If you’ve not read it yet, you’ll find it here.

The comments seem to be consistently divided between those who support my position of cutting off the IRS seventeen years ago and those who oppose my status and standing. I receive my ultimate comfort from the King’s perfect Law of Liberty:

“Stand fast therefore in the liberty by which Christ has made us free, and do not be entangled again with a yoke of bondage. For you, brethren, have been called to liberty….” —Galatians 5:1, 13a (NKJV)

And from the very Comforter Himself:

Friends and countrymen of America,

This brief post is to conclude and sum up the four-part series on the American Christian principles of our government. It was intended to be a seven-part series, one week for each of the seven principles. However, Sean Morgan reached out to me for him to come back to the podcast. I suggested that I interview him to tell his story of how he is perfecting his household governance.

Sean thought that was a good idea, and I am simply waiting for him to schedule that interview.

Until then, and moving forward, attached here is the contextual model for your contemplation of the seven governmental principles lost to most Americans in our modern era. These American Christian principles of government are lost to America because that single body of people that is MOST responsible for the conduct and quality of the nation—namely Christians—are ignorant of these mighty works of America's King Jesus.

To be ignorant of our own history, which is packed with world-overcoming victory for today, is to be brought under the judgment of foreign nations and powers by the chastising hand of a loving heavenly Father. When Christians reject the mighty works of Jesus Christ in their own land, then why should the people be free?

Nevertheless, understanding just the first principle of individuality launched me into a new trajectory of life and living so that my life and family are dedicated to proclaiming the King's most excellent news that He is alive and has never ceased working His works, such as these seven biblical principles of self and civil government.

They are being violated to America’s demise—beginning in a householder's government.

Enjoy this download and share feedback as you are able. I also recommend you go back and listen to the podcasts of the first four principles. Those principles of Jesus Christ have utterly turned my world right side up.

Why I Love America: Self-Governed in the USA

Many people wrestle with the uncertainty of what is an American, including world-famous music artist Bruce Springsteen. Because of Bruce’s concern for America, which is communicated through his music, he’s been asked in interviews on this pointed question: “What is an American?”

Many Americans believe they are free, and that is a good belief to embrace. But if we hold up modern freedom to the lens of the King’s perfect law of liberty, we must deduce that the authentic article of freedom has been replaced with a manufactured version because all freedom begins with the King.

Well over two decades ago, I became thrilled to learn from my American Christian history teachers that freedom and property go together. The evidence of freedom is property.

At the same time, what makes America so unique among the nations of the world is that America is the first nation to embrace the distinctly Christian idea of property.

The Christian idea holds that property is first those substances you don’t see with your natural eyes and without which the property you do see and believe to be yours is not.

The failure to understand the most sacred of all property is why most Christians in America need permission to use and dispose of the goodness of the King in their lives.

Link to the James Rose tribute referenced in this episode.

Power is where all the kingdom action lies. And that is why divine power in the life of the King’s subjects is guarded by problems and conflict.

In this next installment on the Christ-centered, governmental principles of America’s founding-era, I present how people are either instruments of the King’s virtue unto victory over America’s enemies or instruments of Satan’s degradation unto oppression and Babylonian captivity.

Character is God’s plan for the resurrection of your family government today.

Posted by H Barry Durmaz · June 08, 2022 10:11 AM
“Each religion has a form of government, and Christianity astonished the world by establishing self-government. With the landing of the Pilgrims in 1620, Christian self-government became the foundation stone of the United States of America.” —Verna Hall, Preface, Christian History of the Constitution (CHOC), p. III.

Thus, today I introduce this second principle of self-government.

Is America a free nation or dependent upon other nations to do good?

Are you a free person or dependent upon others to obey your King?

Building on the first principle of individuality, the governmental principle of self-government will empower you to see whether America and you are free or beholden to strangers.
Read more
1 reaction Share

Today begins a 7-part series leading up to our national holy day of independence from British rule and tyranny.  This series of teachings is dedicated to two of my foremost teachers in America’s Christian history and government: the late James B. Rose and Katherine Dang.

If you have or believe this yourself—it is a lie.

The unique identity of America has been lost for generations. As a result, our families are under attack and are suffering simply because what is innate to the created order is you being yourself and being protected in that right, which is delegated to you by our unseen King Jesus Christ.

Is the individual primary in society or the group? Learn the contrast between the Christian idea of man and the pagan idea of man, which has major implication on how you live life on the King’s land today.

Understanding the governing principle of individuality will open your eyes to see whether you are truly living free or as a slave.

You won’t want to miss Episode 39 of this podcast ministry if you desire to be faithful to what the Lord Jesus Christ has accomplished in America unlike any other nation on the earth. That’s a bold statement, and one that is backed up with much evidence in the two volumes of law: the laws of nature and the laws of nature’s God.

Are you concerned about socialism taking over and destroying our country? The victory answer is the topic of this episode.

Get ready to have your world rocked and shaken out of the fallen, natural, debased mind of men, designing life for you in opposition to the glorious design work of the all-powerful King Eternal.

Why is the worth of a virtuous woman far exceeding that of rubies?
Because without women of virtue on the King’s land America, there would be no America.
In today’s episode of Scriptures for Patriots, I introduce and read from the writings of two prominent American women of virtue, Lydia Sigourney and Emma Willard.
Be inspired and gain encouragement from the ideas communicated by these American Christian women of virtue and power.

Nursing America Back to Freedom (Part 2)

When one reads the description of the virtuous woman in Proverbs 31, this conclusion is inescapable—she is a completely liberated and free woman.

Such liberation and freedom is a mighty work of our unseen King Jesus Christ. He said so: “Whom the Son sets free is free indeed.”

Liberty and freedom is the gospel purpose of America, and mothers have a divine purpose to nurse her back to that noble standing.

In this episode of Scriptures for Patriots, I draw from Founding Fathers

on how America’s existence is predicated on the virtue of her people, not the least of whom are her mothers. Virtue is power to live free on the King’s land today and educate our children, grandchildren, and spiritual children to be free.

I introduce an assessment tool that reveals to what degree you are honoring America’s Founding Fathers or are providing aid, comfort, and compliance to America’s enemies.

Sources referenced in this episode:

Read the enlightening article Why Women Don't Want The Sufferage.

Read Only a Virtuous People Are Capable of Freedom.